(We're starting a food plot on the farm! This post is the first of a series that will appear about the progress of this project. Stay tuned...)

A food plot is an area set aside that is planted solely to act as a food source for wildlife. Food plots often consist of legumes, like clover, alfalfa and beans, and/or grasses. 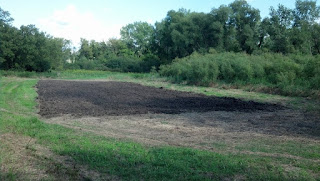 In an earlier post I made reference to lazy hunters. It might be suggested by some that only a lazy hunter would hunt over a food plot. I would argue that installing a food plot properly is not an act any "lazy" hunter would dare undertake. And to find my self hunting over that same food plot seems like a just reward for a whole bunch of hard work.


What this image shows is the result of a lot of soil prep. The area to be planted is one half acre in size. It took three steps to get it to look like this:
I will let this rest for a day or so and then plant. Check back for updates
Posted by Arik at 6:58 AM