In addition to the bird survey, Graham and Aaron are also conducting reptile (snakes!) and amphibian (frogs!) surveys on the Farm this summer. All of these surveys will help us understand the different species and varieties of creatures that habitat here.

Last week I told Graham I would "love" to go along with him when he does his next snake survey. Well, not literally love it - snakes creep me out! - but interesting to see what it was all about. However this morning I was unprepared when Graham rolled up to the office and told me today was the day - my opportunity to see snakes! It's probably a good thing I forgot - likely would have kept myself awake last night, fretting about it.


We headed out on the Ranger and Graham told me some basics about the survey:

As we made the rounds, Graham tried to keep my expectations in check: he hadn't seen many snakes so far this summer. Which, in all honesty, is fine by me! This morning, seven of the nine boards uncovered nothing except impressively large crickets and ants; but under the other two boards... SNAKES!

We saw some Northern redbelly and garter snakes -- both species are small and nonvenomous -- the best kind of snake, if you ask me!

Next week Graham and Aaron will be presenting all their data and recommendations on the surveys they've been conducting. If you're in the area and want to come to the presentation, let us know! And we'll be sure to share their final reports here - stay tuned!

Pssst - there are four snakes in the photo from above! 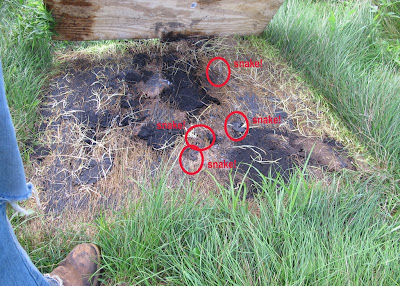